From my mudroom bench tutorial, you will notice how the bench legs align with the beads of the bead board.  Likewise, the locker design will also align around the beads.  I really wanted a shelf with an outlet to put my phone charger and keys.  I also wanted a larger shelf to put a basket for hats/gloves/etc.  The sketch below shows what my master plan is for my mudroom lockers.  My lockers go to the ceiling so I can add some crown moulding.  Determine the height from your bench top to the ceiling and add/subtract height from the cubbies as necessary to achieve the same outcome.  You can see the small 6″ shelf and the large 17″ shelf.

Step 2: Determine what you will need

Other decorative moldings of your choice

If you don’t have your shelves lined up with studs and you aren’t adding a back to the shelves, i.e. you want the bead board to be the back of the shelf, you will probably want to add bracing within the wall as I showed in my Mudroom Bench tutorial.  I added bracing in the wall where I wanted to anchor my Corbels.  Note: I am using structural Corbels, not decorative ones.  Be sure your Corbels can handle the load of the shelf, if not, be sure to attach the shelf securely to the studs and bracing.

To attach the Corbels, I used a 3/4 inch spade bit to first cut a hole about 0.5″ deep.  Then I drilled a hole all the way through the center with a regular drill bit.  I used 5/16″ x 4″ “Rugged Structural Screws” to anchor the Corbels to the wall bracing on the top and bottom.  Then I glued a 3/4″ wood plug into the hole and will putty/sand to hide any trace of the anchors. 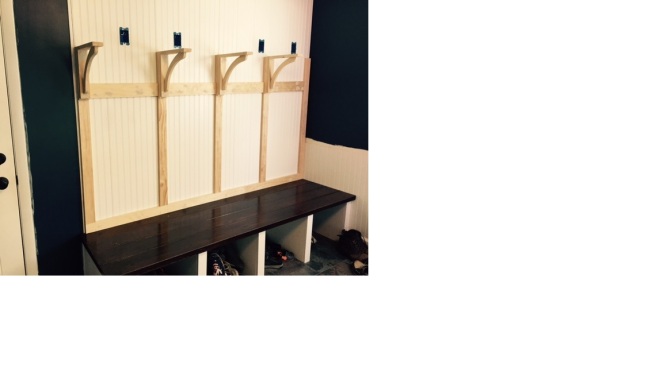 I cut 4 horizontal pieces out of the 1×4 and aligned it with the bottom of the Corbels.  I screwed the horizontal 1×4’s to the lower wall bracing as well.  I figured heavy coats will be hanging from it and didn’t think nails were sufficient.

UPDATE:  So after I attached the locker shelves that I make in the upcoming steps, I had to remove and adjust the Corbels I hung in the above step because even a 1/8″ gap was extremely noticeable.  So I suggest hanging the Corbels after you attach the shelves to the wall.

Step 5:  Make and attach the shelves

I started playing around with Sketchup, and here is the result (note some of the dimensions aren’t exactly right because I messed up something early that wasn’t easy to fix).  You get the idea.  If you zoom in you can see where the dadoes are placed.

Since plywood is a little smaller than 3/4″, using a 3/4″ router bit to route the dadoes for the shelves would have created a sloppy fit.  So instead, I built a jig recommended to me from my Woodcraft magazine.  Place a piece of plywood between two boards.  Then screw the boards to cleats which are perfectly perpendicular to the boards.  Then use the jig to route all your dadoes (routing the dadoes was really easy after I made the jig)! 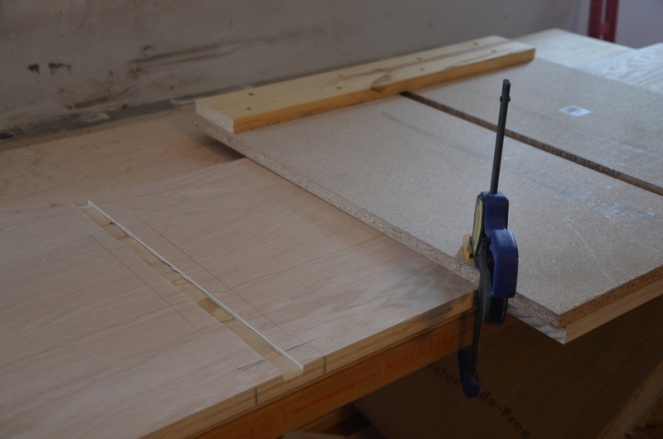 I then assembled the shelves using longer drying wood glue and screws.  BTW, a good tip from my magazine was to pre-drill the holes for the screws in the dadoes first.  That way you know exactly where the dadoes are.  You can use a flush mount drill bit, or do what I did and first drill the hole for the screw (I used #8 screws) then I took a larger drill bit the size of the screw head and just drilled a little out to make room for the screw head so it was flush.  You can also see that I attached some 1×3’s with pocket holes to the top/back of the shelves.  I will anchor the 1×3 ‘s to the studs for extra support.

From here, it went fast.  My husband helped me attach the shelves to the wall.  Then I trimmed… and trimmed… and trimmed until I liked the look of everything.  I used 1×2’s to trim the majority of the shelves.  I used a 1×3 for the top and for the left and right sides.  I put crown moulding at the top and I added another decorative piece of moulding on the very bottom.    Note:  I have put up crown moulding several times.  Each time I learned a little more.  But recently I saw Tommy Silva use the following approach for outer corners which worked great.  Glue/nail the outer corner off of the wall.  You can always caulk the ceiling if there are any gaps, but it is extremely hard to cut a weird compound angle.

I used 1×2’s on the face of the left side to make a square, then I added a decorative quarter round inside the square.  I also added some decorative 2×2’s to the wall just below the shelf.  I glued everything with construction adhesive and used 18 gauge brad nails to hold everything while the glue dried.  After some putty and A TON of sanding, she was ready to paint!

So there are obviously a bunch of crevices and pieces to paint.  I get these awards at work for over-performing which can be cashed out at places such as Amazon.  So I used an award to buy the Fuji Semi-Pro spray system.  After taping everything off, gearing up, and mixing the paint according to the instructions, it was time to paint (so nervous btw…I could have ruined everything!!) 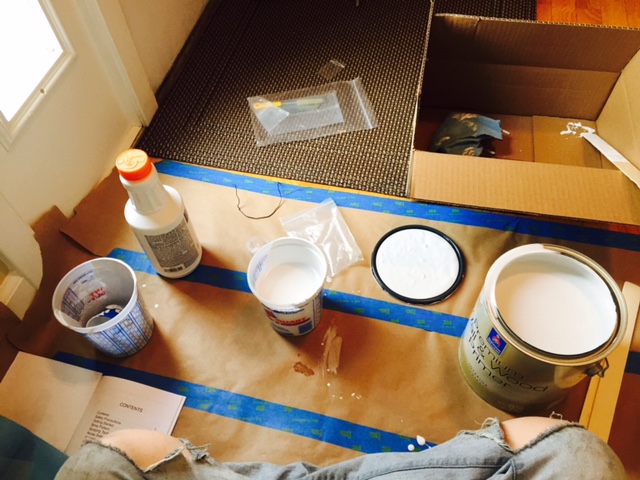 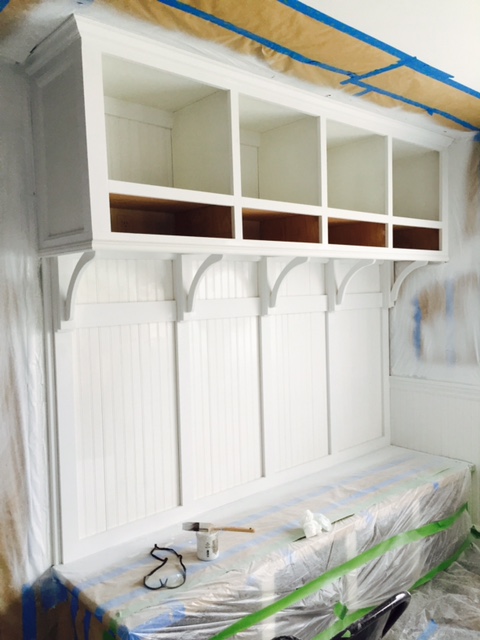 The lower shelf was too small to get the spray gun into, so I had to paint that by hand.  Now I have to say, the sprayer worked great!  I had a few drips that I had to smooth out with a brush, but it was pretty awesome!  What I didn’t expect was all the grain on the wood raised after the first coat of primer.  In hindsight, I would have either primed by hand then sanded or I would have pre-conditioned the wood before painting so I could prevent what happened.  But there was no time for me to let the primer dry, sand, clean-up then add the top coats before I had to go be a mother, so I had to take down all my taping/plastic and wait a week until I had more time to paint.  By this time, I was not about to tape the room up again (it took 4 hours to tape everything).  So I just painted the top coats by hand incrementally over the next few weeks, which worked fine.

I wanted these Pottery Barn hooks that hid the screws, but they were like 20$ a piece.  But I found these on Amazon for like $4.50 a piece and they worked great!

So here is my re-creation of my inspiration photo… what do you think?? 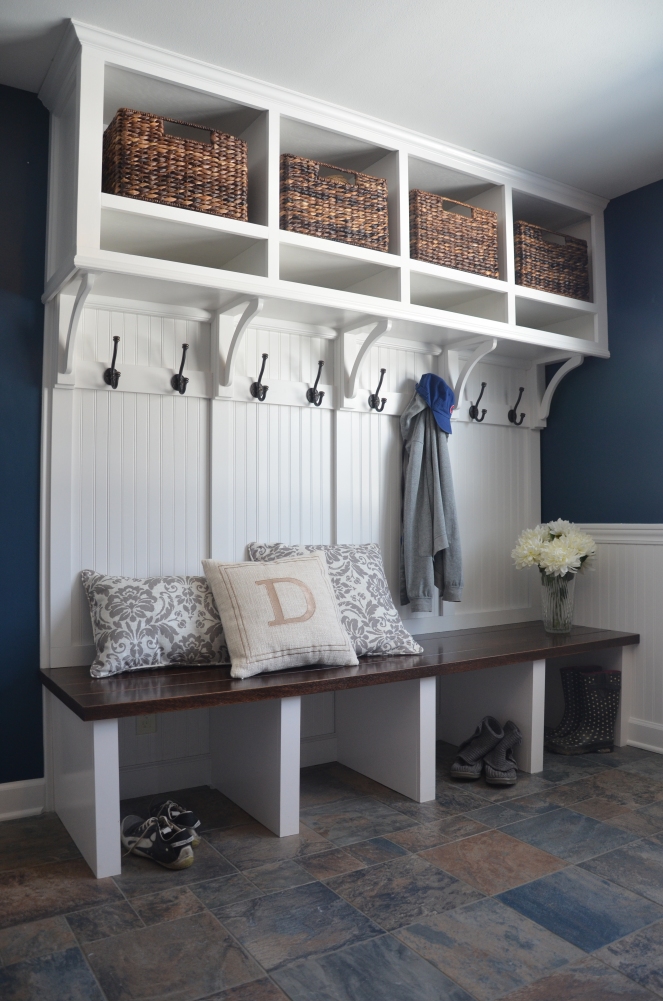 And here is what it will really look like…